An interpreting assignment in Bogotá was offered so I jumped on it. I flew to Medellín on Saturday, and today my wife and I came to the capital. It’s great to be back in Colombia even if it’s just a week.

Following are some curiosities that I found worthy of a picture.

On our way to the airport today we passed this load of bricks. They tend to be hollow here and are used for structure rather than siding, although they may be exposed and varnished. 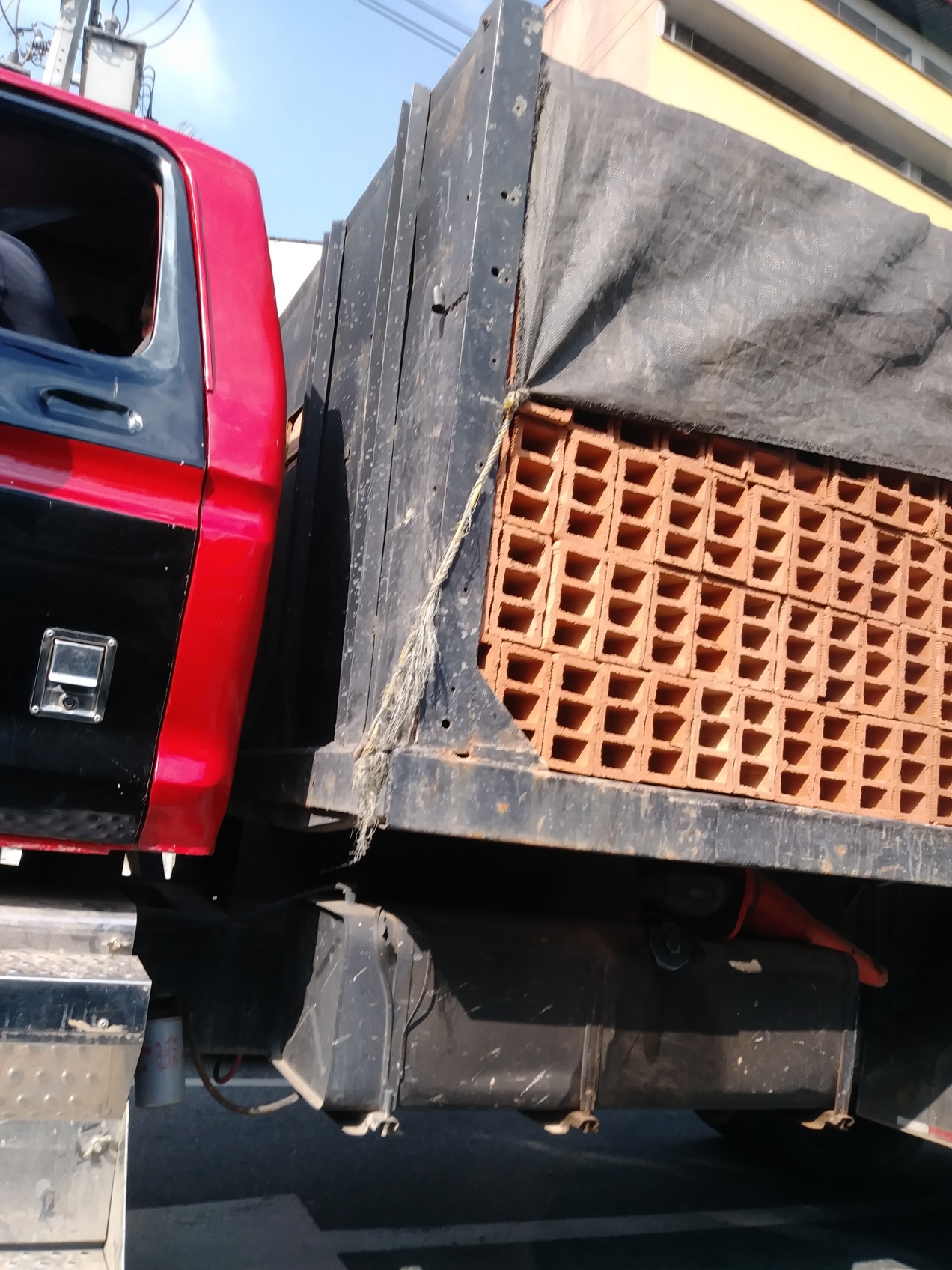 This itinerant vendor was offering pineapples for CP$2500 (90 cents US) apiece.

Alicia says: “Niño del Alma is a song from the record Canción de Navidad (Christmas Song), a special pressing issued by the University of Antioquia. This bambuco was written by the renowned composer Luis Uribe Bueno from Santander, Colombia in 1953, and since then has graced the repertoire of Colombian Christmas songs. The arrangement is by master Jaime Chávez from Nariño, Colombia.”

I managed to pull off a complete surprise with this birthday serenade for Alicia last night. The Trio América is considered one of the best in Colombia, with a 52-year history. It is now in its second generation with dad Oscar and sons Elkin and Nelson.

This song is not as polished as their work tends to be because it wasn’t in their repertoire; they arranged it a couple of hours before the serenade. I requested it because it was an important part of my courtship of Alicia. The original version was recorded by Nino Bravo. Alicia and I were dancing to it when I asked her to marry me.

Elkin, on the right, creates most of Alicia’s arrangements. He’s a musical genius, possibly the best requinto player in Colombia (the requinto is a small guitar designed for picking), and able to play nearly any instrument.

I will post other songs from the serenade as I get them uploaded. Enjoy!

This song was composed for the holiday season in 1972 by the famed Venezuelan composer Hugo Blanco (known for the song Moliendo Café) and has become a Christmas favorite in much of Latin America. My wife Alicia Isabel Santacruz recorded this version some years ago, with a light arrangement by Jaime Chávez.

…is this recording made of El día que me quieras by my wife, Alicia Isabel Santacruz. I have scoured the internet, and have not found a better performance.

It was written by Alfredo Le Pera and Carlos Gardel, and featured in a movie by the same name in 1935, performed by Gardel. Alicia’s recording was released a couple of years ago but is not widely available.

Following are the lyrics, along with my translation:

The soft murmur of your sighing caresses my reverie
How life will laugh if your dark eyes choose to see me
And if the refuge of your light song-like laughter is mine
It will soothe my wound. All, all is forgotten
The day that you love me, the rose that adorns
will put on party clothes of its favorite color
And the bells will tell the wind that you are finally mine
The fountains, delirious, will tell each other of their love
The night that you love me, from the blue of the sky
the jealous stars will watch us go by
And a mysterious ray will make its nest in your hair
A curious firefly that will see that you are my solace

Panderetazo: blow given with a tambourine.

Yesterday I flipped open my Spanish-English dictionary and this word caught my eye. It gave me great joy.

I now have fantasies of keeping a tambourine by the door to drive away unwanted callers.

Another installment in my never-ending quest to share delightful Latin music with the world. These lyrics sound pretty dumb in English (see below), but you get the idea. Probably the most similar American song is Roll In My Sweet Baby’s Arms, by Flatt & Scruggs.

This list of false friends includes several of my favorites. It’s fascinating to see that plaga means “pest” and peste means “plague.” As a result, Hay una peste de plaga por aquí gets translated backwards: “There’s a plague of pests around here,” or much better: “This place is infested with bugs.”

In Costa Rica, 20 years ago, I heard the term plagio in reference to a kidnapping. I thought it was funny because in English, “plagiarism” only refers to what students have done since antiquity: copying other people’s work and presenting it as their own. But when I investigated the etymology of the word, I discovered that in Latin, plagium means “kidnapping.” The term was modified in English about four centuries ago to refer to certain kinds of intellectual property theft.

It was also in Costa Rica that I heard an amusing story about a missionary who was preaching about what Jesus meant when he said we are the salt of the world. The missionary unintentionally told the congregation that they needed  to be condoms (preservativos) in their society.

When I was a kid, I read  the question, ¿Qué pretendes? in an adventure book, and I was very confused because the character to whom the question was made wasn’t pretending anything. Upon examining the context, I came to the (correct) conclusion that the question meant, “What are you trying to do?”

My wife, a singer very well known in Colombia, plans to record the beautiful Gloria Estefan song called No Pretendo, which says the following:

What a fortunate man I am, that from among all of her pretendientes Alicia Isabel chose to love me.

Here is the list of false friends beginning with P:

Plagio:  “kidnapping; plagiarism”
Plagiarism: “copying another person’s work to present as one’s own”

Pretender: “aspire; court; pretend”
Pretend: “simulate, fake, act as if something is true that is not”

Propaganda: “advertisement”
Propaganda: “information issued by a political organization to promote an idea or cause”

Most mistakes in translated texts are the result of overly literal translation, in my experience. When we translate word by word instead of creating an idiomatic translation, the result includes strange and sometimes incoherent phrases or sentences. For instance, “He waited a minute or two” can be translated literally: Él esperó un minuto o dos, but it sounds more natural to say, Esperó un par de minutos “He waited a pair of minutes” or Se detuvo un momento “He paused for a moment,” because these are Spanish idioms.

Note that in English every sentence has to have a subject, in this case “he.” In Spanish the subject is omitted when it is clear from context and conjugation, as in the latter two examples above. A common error made by native Spanish speakers translating into English is to omit the subject in such sentences. This is especially tricky in sentences that don’t ever have a subject in Spanish, like Está lloviendo, which they might translate as “Is raining” instead of “It’s raining.”

In the examples above, the meaning is retained despite the literal translations. However, in the worst cases, a literal translation produces completely incorrect meaning, especially when false friends are involved. For example, a Latin American family took their son to the emergency room because he was dizzy and almost unconscious. They didn’t speak English, and when they tried to explain to the (English-speaking) nurse that the boy appeared to have been poisoned, she heard the word intoxicado and thought they were saying that he was drunk. The result was tragic, because the doctors saw little urgency in attending to someone who was drunk, and by the time they discovered the real problem, it was too late.  “Intoxicated” can refer to poisoning in English, but its primary meaning is “inebriated.”

False friends are constant reminders of the dangers of literal translation. “A gracious hostess” is polite; on the other hand, una anfitriona graciosa makes us laugh. “The teacher molested the children” is a horrible situation, but El maestro molestó a los niños could mean something totally trivial. “It just hit the target” doesn’t mean Dió justo en el blanco “It hit exactly on target” but rather Apenas le dio al blanco “It barely hit the target.” But remember that “That was just what I needed” can actually be translated Era justo lo que necesitaba because that particular sense of the word “just” does coincide with its Spanish cognate.

The website http://www.linguee.com is a great source of examples of translated words and phrases in context, extracted from  published text. It’s the site I most use when I’m translating documents. Of course, you have to look at the context to see if the examples are relevant, and you have to take care because not all of the translations are correct.

Lenguaje: “terminology, jargon”
Language: “the tongue used by a community”

Most of the false friends beginning with D, E, or F have very different meanings, so a transliteration would produce a very inaccurate translation. For instance, Su decepción fue evidente does not mean, “His deception was obvious” but rather, “His disappointment was obvious.” If the director of a company has been destituido, he has been “fired” or “dismissed” but is not necessarily “destitute” because he may have been granted a good severance package. And the idiom en absoluto doesn’t mean “absolutely” but rather “absolutely not”.

I omitted excitar ~ “excite” because they are very close cognates, but it is important to keep in mind that excitar/excitado tends to refer to sexual arousal. “Excite/excited” can as well, but the more common meaning is “enthuse/enthusiastic.”

Desgracia: “misfortune”
Disgrace: “cause of dishonor”

Discutir: “to argue, debate”
Discuss: “converse on a topic”

En absoluto: “no way, not at all”
Absolutely: “for sure, definitely; completely”

En la vida: “never in my life”
In all my life: “in the sum of my experience”

Experimentar: “to experience; to experiment”
Experiment: “to test; to attempt something”

Fútil: “trivial”
Futile: “activity that is sure to be unsuccessful”

Sample text using this vocabulary:
I was disgusted at the director’s deception, the evidence of which was quite distinct. It was a disgrace to the whole dormitory. The investigator, a very educated man, was fastidious in his attention to detail. During our discussion, he said, “The director must have known that his fabrications would be futile.”
“He told me that if we fired him, he would be destitute,” I said.
“Absolutely,” said the investigator. “He spent all the stolen money.”

Back translation of the very bad translation:
I was annoyed by the director’s disappointment, whose evidence was quite different. It was a misfortune for the whole bedroom. The investigator, a very polite man, was irritating in his attention to detail. During our argument, he said, “The director had to know that the things he built would be trivial.”
“He told me that if we fired him, he would be fired,” I said.
“Absolutely not,” said the investigator. “He spent all the stolen money.”